All About Court Reporting 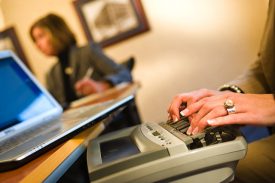 Every job field is constantly changing. Real-time court reporters are no exception to this trend. With more computers being installed and implemented into career fields and technology starting to be increasingly integrated into United States courtroom, you can see that the tech involved in fields like court reporting has changed slightly the way that courts operate since say, the sixties (when there was very low-tech stuff being integrated if at all).

Today we’re talking about technology in courtrooms and whether they stand the risk of replacing court reporters, so read on and find out more about this topic!

It seems like courts are trying to cut costs and find those ways to do that just like any other field. Introducing technology may be seen as a way to reduce money spent, but is it fully worth the investment? While the California Judicial Council came out with a report in 1992 that said video and audio recording could save courts thousands a year, courts were intrigued. However, a concept is one thing and having technology perform as well as or better than a human court reporter is another.

So, is the reality as that nineties study suggests, and is that solution a true one or hiding behind the illusion that it will cut costs AND perform well? The short answer is that it’s complicated and that right now ultimately humans are the better pick for the job!

Stenographers and trained court reporters are just better at their jobs! While electronic recording devices are somewhat adequate, they are no substitute for the real thing. Experience is one thing– people who work in this field often have a lot of field experience and perform reliably and in the same way for every court case. Can tech do that? Not when it’s occasionally at risk of malfunctioning and breaking down.

Like it or not, human stenographers are more reliable, high-functioning, and accurate than tech is at this time. But as tech advances, there may very well be a point where they are used more frequently in courtrooms. Even Gary Cramer, the spokesman for the CCRA, says that he has confidence that the field will adapt to changing technology while still staying healthy on the human stenographer end of things. In other words, coexistence will win out.

Ever since the nineteenth century, court reporters have had a seat in the courtroom. The tools may have changed but the goal is still the same. Perhaps there may even be a need for court technologists that monitor the tech being used. While there are fears that tech will replace people power in the field, and while some reporters are losing work to this tech there are also not enough courts doing this to warrant the worry. However, some reporters are arguing that hidden costs for audio and video recording are coming down to clients and attorneys, meaning that litigants are paying more and courts are paying less, while the copies cost far more than they would from a reporter.

The reality is that this field is going to stay around for a while. It may evolve slightly, but until the tech can be as accurate and able to be relied upon as a person who has been working this job for a long time, it’s not going anywhere soon.