For the Record: All About Court Reporting 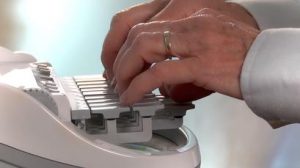 Are you interested in becoming a certified court reporter? Many people decide to pursue court reporting as a career. The great thing about this field is that there is a steady demand for reporters, and that means that there will always be jobs opening as reporters retire or the need for them remains constant or even above average.

Reporters play a very important role in the court system where they are the ones that are recording the conversations and the events of a courtroom. If you have ever been watching television or a movie and you see a court scene and there is a man or a woman in the corner or a certain place by the judge taking notes down via typing and they never say a word, that’s exactly what a court reporter does!

That’s not to say that a reporter never speaks; they do speak up when they need clarification. After all, the record must be accurate. They have to hear every word and take it down. Today we’re talking about aspects of the record and a court reporter’s job– things that you may already do and incorporate every day or things you can learn about reporting if you are considering it for a full-time career. Read on and find out more.

Court reporters have several obligations. If you are a reporter, you may find that you’re in a situation where the opposing counsel has a problem with a line of questioning, tell their client to not answer, and then everything is recorded– just when you’re almost done with your deposition outline. Or maybe a witness has been instructed by counsel to not answer a question but make comments that indicate their witness knew things relevant to the questioning after.

When heard by a reporter, the deposing attorney may request them to go on the record once more so that the witness can be questioned once more. They may not respond again, and the council won’t go along with confirming any outside comments, prompting the attorney to ask the reporter to record comments that were made off the record. What should you do in this situation?

There is a set of rules for these types of circumstances because reporters are just there to record what occurs. When either party wants things on the record, a stenographer should go on the record. A reporter must be fair to all parties. They must take down proceedings unless both of the parties want to go off the record and are in agreement. Essentially, they must transcribe information that is being confirmed as on record.

Even when a deposition is cut short, a reporter should record that they are excused. When the record ends and there is no more for the day, the reporter takes down that it is done. Reporters must follow the courtroom rules. They must never put in their own opinion or comments that were made off the record. They must take down what is on the record and that is it.

You may provide testimony of events or statements if required or sign a statement to that effect (read carefully when reviewing in case of later deposition or subpoena summonings). Reporting is fairly simple when you break it down! Thanks for reading, and happy reporting– now or in the future.