In a Technological World, the Court Reporter Remains a Valuable Asset 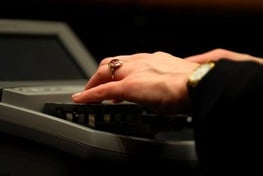 In a world fueled by technological advancements, the human element of the Court Reporter is an essential part of every court hearing. In fact, there are many instances during hearings and trials when court reporters must answer before the judge, jury, attorneys, plaintiffs and defendants. This often means reading specific portions of the official court records out loud and making notations.

The presence of a court reporter signals the seriousness of the hearing since it alerts all participants that there will be an official recording of the proceedings, which is then treated as a piece of legal evidence. This can significantly impact the final outcome of the case.

Teresa Durando, who opened her own court reporting firm in Fort Lauderdale, Florida in 2006, encourages job seekers who are searching for a unique and dependable career to take a closer look at court reporting. During National Court Reporting Week, which took place February 15-21, she was quick to point out that as new technology comes along, many jobs are becoming obsolete, but that there will always be a need for court reporters.

Durando, who began her court reporting career in 1980 with New Orleans’s based Metropolitan Reporting, was quick to point out that technology has helped to advance the career and what Court Reporters are able to accomplish, however. She admitted that court reporters now use filtered shorthand computer programs to provide judges, as well as attorneys and their clients, with an instantaneous script of the proceedings and that these real-time programs are able to translate shorthand into completely understandable language, which is a significant improvement from the stenographic machines and typewriters of yesteryear.

Durando also encouraged people to start thinking outside the box, since court reports possess skillsets that can easily be applied outside the courtroom as well, including opportunities in broadcasting, where real-time captioning for everything from sports events to breaking news is required.