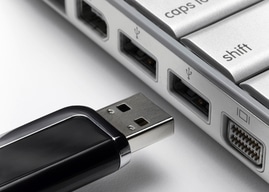 There is an increased usage of video evidence from all manner of sources in courts of law. This has led many to put forward the practicability of delivering such evidence via USB discs. Largely due to the fact that the discs can be placed in the custody of court authorities just like what is done with other kinds of evidence. However, this proposition might not be the best solution.

These devices are susceptible to virus attacks as was shown recently at the hackers conference. Researchers developed a malware that they named BadUSB, which was in a position of taking over a computer, covertly altering files installed in it, and even re-directing the user’s internet traffic. Since this virus is located in the firmware as opposed to the disc’s memory storage, the attack coding could stay invisible even when the user attempted to delete the files in it.

On the flipside, the utilization of USB discs as evidence might not meet the laid down chain of custody requirements in the court of law. To begin with, there are numerous examples where video evidence files configuration must be altered or even edited for them to be compatible with the PC used. This makes it imperative that the processes that are utilized for such evidence presentations to be well documented and attested by the party that submits them. This documentation should also be filed with the video in support in support of its introduction as evidence.

In scenarios that involve a jury, the judge may want to permit them to play such video evidence while they are on their own. To this end, some courts provide mobile devices like iPads that can be connected to a screen in the jury room. This certainly goes a long way in fast tracking the jury’s work. Since they wont be necessitated to adjourn and ultimately return to the courtroom to view the evidence as they would with videotapes and TVs.

Nevertheless, one thing to always remember is that a digital file is usually utilized. Software such as LegalXML and ECF e-filing are used to connect to an external server. The latter of which can be court operated, law enforcement agency owned, government provided or from a relevant contracted service. Whichever the case, such a server ought to permit the storage of video evidence digital signatures for proper authentication.

USB discs can still be utilized to load such files to the server in use, and ideally they should only be used for this task. And ought to be checked in or out by a court of law’s control office. While also get them scanned and cleaned in between usage. This, however, does not in any way guarantee that these devices will be immune from getting viruses from the computer that is used to load the files in them. Relying on such an approach is naturally extremely time wasting and also drains the meager manpower of a court of law. This makes e-filing to be the most practical alternative in most of these circumstances.