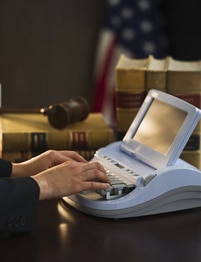 So, what types of traits should a good court reporter look to emulate and possess? Check out this list of traits to find out.

Performing to the best of your ability is part of what it takes to be a successful professional. To this end, court reporters require certain cultivated traits that are useful in other fields but are essential as far as court reporting is concerned. There is so much information that court reporters are exposed to in the court room (some of it disturbing, all of it sensitive and by needs confidential to the room) that having these traits are a must have. Most court reporters are able to develop these traits if they have not already. This list is formulated in order to help you strengthen these traits and be aware of their necessity. Let’s get started!

Being early and prepared for court proceedings is probably the most important trait a court reporter can develop. It’s not enough to be five minutes early– that leaves a small window of time that could easily transform into running late. Unexpected developments can always occur. A good reporter never leaves being early to the whims of the traffic. They set out their clothing early, have their equipment ready, and leave themselves a good amount of time so that they always show up early. Being punctual means being at least 15 minutes early for a court reporter, so groom this trait in yourself. It’s crucial to your job!

Court cases are often intriguing, interesting, topical, and most of all, and confidential. While the majority of court reporters respect this, the fact of the matter is that it’s difficult to fight the urge to discuss or gossip about cases that are ongoing. A commitment to confidentiality and never discussing cases with outside individuals is a wise choice. Not only will it help you keep your job, but it is a valuable part of overall professional conduct in this field.

Having the ability to keep your composure during trials, cases, or testimony is key. Many cases will involve testimony, media, or evidence that is not only graphic but disturbing. It’s the job of a court reporter to stay composed and record the proceedings. Not every case will be sunshine and daisies, but it’s your job to stay neutral and report.

These are four key traits that any good court reporter should place a priority on developing. Even if you believe you already possess and exhibit these traits, it never hurts to review them and keep them in mind. A good court reporter is reliable, punctual, composed, professional and impartial. At the end of the day, the more you groom these traits, the more respected and successful you’ll be in your career, and you’ll be a valuable asset to any proceedings or case.