Can a Juror Pledge Stop Jurors from Googling and Blogging? 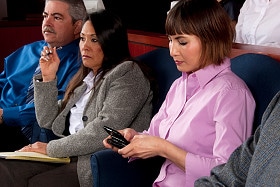 We use the Internet on a daily or near daily basis– we check our phones constantly and we are always connected to them. Many people blog, post, or comment on the Internet as well. It’s become second nature; all part of life as usual in the Information Age. But when it comes to jury duty, could this be a bad thing?

It turns out that the very thing that so many of us do on a regular basis could be bad news for a trial in court. The problem of jurors getting outside information that they did not receive in court has been a known concern for some time now. However, now it’s starting to become very apparent that the fears are justified. Now steps are being taken, such as a juror pledge– but can that be enough for curious and information-getting driven jurors?

Computers and smartphones are everywhere, and there are constantly mistrials and verdict challenges thanks to juror researching, Googling and blogging! These are serious issues facing everyone involved, and you never know if it could affect your jurors. Trial consultants have been discussing updating the instructions given to the jurors by the judge so that they state that using electronic media to talk about their jury service or do research. Yes, sharing online may be a natural impulse, but in the case of court cases, it can be quite damaging.

One of the problems could be curiosity. The Googling or blogging could also be the result of the desire of the juror to make an informed decision. Although it can be a somewhat noble impulse, the idea of the Juror Pledge came about as a way to try to hammer it through to a jury that they cannot and should not go online and either speak or gather information about the case. The threat of punitive action as well as the added emphasis is better than nothing, but will it work? 25 to 33% of people surveyed said they would Google anyway despite warnings– not a very good sign.

Juror pledges are tough because no one necessarily has to keep them, and one could easily lie about whether they had broken their pledge or not. The Pledge could reinforce information and requests that have already been made, but they also could be disregarded. Different pledges have been composed and are hoping to be effective. Whether they will or not is no guarantee, but it’s at least a good first step in the direction of addressing the issue. Most judges already remind jurors to not look at things online, post about them, or talk to anyone about the case when they leave the courtroom at the end of the day in order to remind jurors of their duty. Video usage akin to a PSA has also been suggested. Where the court system will ultimately go with this, no one knows.

Whether the Juror Pledge will ultimately be replaced by another measure or approach, no one knows. At the end of the day, all the court can do is emphasize to jurors the importance of their actions and warn them against talking or blogging or even Googling their court case. Can it stop anyone? No, but it’s a good first step to encouraging people against it and avoiding a mistrial and more.