The Court Reporter’s Best Friend: A History of the Stenograph

The stenograph has been an avid part of a court reporter’s job ever since its integration. It may look quite dated to some, but court reporting 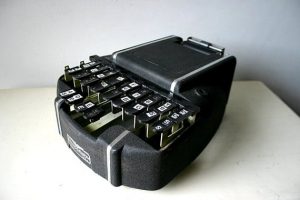 could not be done without it.

How did the stenograph first come to be? This revolutionary shorthand machine was in the works for quite some time. It was 1877 by the time that someone perfected it, and Miles Bartholomew has gone down in history to be the first person to invent a working stenograph.

The original model was fine-tuned while patents were quickly secured for it from 1879-1884. Miles had a company in Illinois named the United States Stenograph Corp. that sold the machine. Bartholomew created the corporation around his stenograph invention.

The original style of stenograph was used consistently by writers globally until 1937. These machines each had ten keys, and each of those used counted as a single-letter stroke. As a result, dashes and dots would be created and shorthand via machine was born.

Bartholomew himself was well-suited to invent the machine. You know what they say, necessity is the mother of all invention. Well, Miles was a court reporter, so you can see the impetus to create a machine that would help him and everyone in his field as well do their jobs more efficiently!

His machine was the first to be officially integrated into the job. It was also used to train future court reporters in some schools, but unfortunately, Bartholomew did not get as much financial success from the invention and sales as expected. However, he accepted that, and was just happy that the tool was helping court reporters to do their job.

He even wrote that public favor had turned to the stenography machine over the pen, letting old prejudices against the machine fade away. However, another shorthand machine from another inventor was on the way.

The Anderson typewriter was created in 1889 by George Kerr Anderson. This time, the stenography machine had a keyboard that would allow the typists to press down more than just one key at the same time. The machine favored English letters over the dots and dashes system as well. Full words and syllables could be taken down with just one stroke.

Shorthand would be sped up, with Anderson channeling the typewriter as design inspiration. While the machine did not gain major traction, it was used in the recording of the inaugural speech of President William McKinley.

In 1911, the Stenotype Shorthand Machine was invented in Ireland by the Universal Stenotype Co. This machine was different from the others. The keyboard was fully depressed, and each stroke could write words and numbers phonetically. It had the least stroke to output ration and even won a national speed contest in 1914 (with a 99.3% accuracy). At 11 lbs., it was lighter than those that came before.

Today, court reporters still use the stenograph daily. Now that you know the history, you can appreciate the machine in its present form and all the changes and updates that came along the way to make it what it is today.