The Necessity of Court Reporters

If you don’t work in the legal system, you may not think about the position of court reporter or what they do much. You may know the basics but think that a reporter may be an afterthought, as 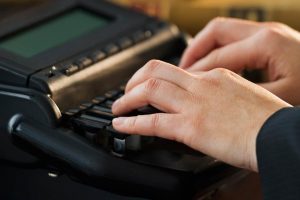 they sit quietly and type what goes on.

However, anyone familiar with law knows a certified court reporter is vital to proceedings. You actually legally need a reporter there in court before the court can proceed in most cases. Even when a judge is allowed to choose between a recording device or reporter, they usually select a reporter so as to get an accurate case transcription.

Court reporters go through special training in a variety of subjects (everything from courtroom proceedings to law, legal and medical terminology). This helps them to be prepared for recording all that is said and done that is going on the record in court. They also become proficient when it comes to operating a steno machine, typing 225 words a minute minimum!

The record is translated into a transcript that is written out. This joins the court clerk and becomes part of the case file’s official record. It can be referred to in court for the case’s duration, with attorneys that are involved having the option to request copies so that they can review proceedings.

When a case ends up being appealed, transcripts become increasingly important. The U.S. justice system’s right to appeal is an option and central part of the system. This is precisely the importance of court records that are accurate. Applicants can select whether they would like to include a transcript in full or part of it in their appeal request. Judges also will use a transcript when deciding whether to grant an appeal or not.

It’s not simply transcript production that alone makes a court reporter so valuable when it comes to legal proceedings. Their presence and awareness allows for everyone to acknowledge that words spoken are translated as official evidence, and can be reviewed at any time.

While court reporters are often silent, these professionals are more active than one might initially guess. They are constantly taking in what is being said and done and are actually doing quite a lot at all times, even if they are silent.

A reporter’s job is to create an accurate record. They can often speak up so that they have someone say something again if a word or part of the sentence has been missed. They may be consulted as well, asked if they can read back things that were said at certain points.

Reporters cannot be replaced with technology at the current moment and have the same guaranteed results of quality and accuracy (which go hand in hand in this field). However, even with the desire to help a budget out by ‘cutting costs’, it’s just not the same. Transcription accuracy, reliability, audio recording, and more are all concerns. For the time being, there is no replacing a certified court reporter and reaping the same benefits.

Replacing reporters by technology is unlikely and gets in the way of accuracy more often than not. With demand projected to rise for court reporters over the coming decade, it is and continues to be a great career to pursue and work in.