Court Reporters: Are They Old Fashioned?

We live in an era where there are more technological innovations than we can keep up with. Modern technologies, ranging from wireless charging systems to self-driving cars and virtual reality, make our world a completely different place from what it was two decades ago. 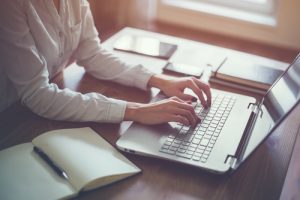 It is therefore rather surprising that with all the modern IT solutions, stenographs are still used by court reporters to capture court deliberations. They may seem like relics of a bygone era, but stenographic court reporters actually do real-time legal transcriptions better than any available software.

For one, entry-level reporters can easily deduce word pronunciations in different dialects and accents, something computer software can’t do yet. Most importantly, they seamlessly combine their stenographs with computers to provide magistrates, lawyers and other clients with ultra fast and accurate transcripts.

Traditionally, court reporters would transcribe all the spoken word in a court session, then manually filter the stenography into legible words. However, inpatient clients and modern technology have driven most stenographers to integrate computers into their work.

With the help of a laptop or tablet, court reporters can now program their translation applications, to instantaneously turn their shorthand notes into legible language. Real-time transcribing means that clients and courts can get access to transcripts of ongoing legal discourse, within a few minutes.

Additionally, the integration of computers and computer applications in court stenography means high-level court sessions can be translated and captioned on screens, in and out of the courtroom. Media houses are especially known to hire court reporters when covering public-interest cases as well. You didn’t possibly think that all the subtitles and captions you see on live transmissions of court sessions are entirely the work of ordinary journalists, did you?

In simple terms, court reporting is an ancient practice that, according to most modernists, belongs to legal museums. However, standards and practices within the profession have continued to evolve and there has been a willingness, across the board to embrace new technology.

This adaptation of modern technology into the court reporting process effectively puts to rest the “old-fashioned” assertions. After all, apart from the stenographs, everything about modern court reporters is, well – modern. From the training methods to devices and software used and most importantly, the output (transcripts), there’s nothing really backward or old-fashioned about court reporters.

Even with underperforming economies and bloated expenditures forcing most governments to cut costs and digitize, court reporters have never had to fear for their jobs. And that’s not likely to change anytime soon.

As proof of their reliability and credibility, court reporters are in very high demand in the disposition and testimony settings. Matter of fact, there are more court reporters employed by law firms and individuals as compared to the courts or governments.