Court Reporting: From Stenography to Technology 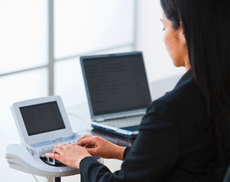 With any field comes updates, and the job of a real-time court reporter is no exception. Technology and computers are more frequently being installed in courtrooms in the U.S., and courts are constantly trying to find ways to cut costs using technology. Specifically, audio and video recording may be replacing court reporters in some cases, but is it the best move?

When it comes to technology, is it worth the move? Even back in the nineties, the California Judicial Council submitted a 1992 report that stated that video recording in courtrooms could save courtrooms $41k a year, while audio could save $28k. This alone is reason enough for courts to consider it, but could they be risking quality for a solution that seems more reliable than it actually is?

Electronic recording devices are certainly no match for stenographers and court reporters. The people in this field have proven time and time again that they are capable of doing their job adequately and providing the court with the results they need. Spokesman for the California Court Reporters Association Gary Cramer says that he is confident that the court reporting field will adapt to changing technology and that he has confidence that “the court reporting field will stay healthy”.

Court reporting has been around since the nineteenth century and will likely survive into this century as well. As the tools used and the machines incorporated have changed, all the way to computer aided transcription, court reporters have still been required. While reporters currently take down what happens it court, it may so happen in the future that their job may require handling the technology and running all tech in the courtroom and even become court technologists, running the computers and recording equipment and making sure that the hearing is accurately recorded.

There still remain, however, fears that court reporters will be increasingly put out of work by the new technology. Some reporters are even losing work to audio or video recording, causing tension between court reporters and the courts. Some states are even setting court rulings allowing courts to replace court reporters for technology, while many reporters are contesting these actions, while others argue that the audio/video recording costs are being put on attorneys and clients, costing the litigants more and the courts less with hidden costs, and transcription copies cost more than from a reporter.

At the end of the day, it is most likely that court reporters will not disappear abruptly, taking the field with them. Incorporating technology into the court as the sole recording process is still a pretty risky gamble– one that most courts are not opting for. With the main goal being accurate reporting and a job well done, it’s safe to say that the burden of court reporting is still squarely placed on the reporters’ shoulders. They are still needed for high volume courts, capital crime cases, big cases, and for purposes of reliability and accuracy. Real-time court reporters in the field need not fear– for now, their jobs aren’t going anywhere.