The Importance of Stenographers in the Courtroom 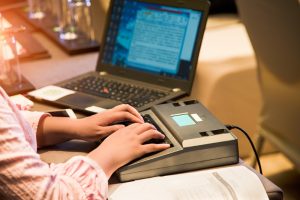 When it comes to the courtroom, how integral are stenographers to the process? Even though many courts have adapted or are considering adapting technology to supplement the work that real-time court reporters do, it is by no means a battle of the updated tech versus the human worker.

When it comes to being a court reporter, it’s a very important job. These individuals take transcriptions of what is said and done in a court cases. It is the record of what happens and accuracy of the information within is crucial.

You can already see that quite a bit falls upon the shoulders of a stenographer. We’re going to go into a bit more detail about why stenographers are such an important part of courtrooms across the nation; read on and find out more!

These days, it may seem like technology is being integrated everywhere that you look. From a robot that is able to flip burgers to mechanical bartenders that can make a cocktail to automated grocery store checkouts and chips in your credit and debit card, it may seem that the future could very well be now.

However, the absence of technology replacing human beings completely may be a good indication that the tech world is not yet at the point where they can totally do a better quality control job than people. While in some cases a machine may prove to be more efficient than an individual overall, incorporating computers or robots into actual total jobs may be more problematic than one might think.

Consider the field of court reporting– stenographers must be paying close attention to the proceedings in order to take down what is said and done. If they don’t hear something correctly because it is said quietly, mumbled, or just did not understand what was spoken, they can and must ask for clarification so that the transcript is right.

However, a computerized audio recording system does not have the self-awareness to do so– and so part of the transcript may have recorded what was said, but it is not able to be deciphered and that part of the audio is incomplete. A machine may never even know that they have made an error. Since legal records need to be totally accurate, you can see how a person would be better at this job than a tech counterpart.

Human court reporters are also valuable in many other ways. They have experience in the field that lends itself to being more accurate. They also are able to quickly make notes in shorthand, something computers simply cannot do.

At the end of the day, integrating tech into human stenographers’ jobs may be a successful compromise. Court reporters are already taking advantage of programs and apps in the field. What does seem unlikely is a total move towards automated reporting from people to audio tech. While it would seem that courts could save a lot of money by switching over, the initial cost of the tech is also joined by problematic performance, the need for repair, and more.

Machines break down– people don’t! When the name of the game is creating accurate records, you cannot do better than hiring a real person to do the job. The accuracy, experience, focus, and intelligence of a human stenographer is simply too valuable to ever truly be eclipsed by a substitute.