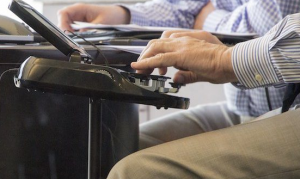 Do you know what a certified court reporter does? Maybe you work in the field of court reporting or maybe you are considering it as a future career. Maybe you’ve never heard of it before.

While many people may initially assume that a court reporter is on television due to the reporter in the title, they actually are kind of the opposite of standing in front of a camera and holding a microphone. In fact, a stenographer’s job is to quietly observe and listen and take down all events and words said in a courtroom for the record.

A court reporter essentially takes what is happening and puts it down on record in written form. They are usually present for either a deposition or a court case. They will take down every word spoken and every detail of what happens. They are the ones preparing official transcripts of sworn testimony to be used by judges, attorneys, and litigants. This is an important job as the transcripts are the official record of a hearing, deposition, or trial’s events.

As you can see, a court reporter’s job is to certify that the transcript matches perfectly to what was said and done. Not only does this attention to detail take a lot of skill, but stenographers have taken training or college programs that are rigorous and cover steno writing, speed, and accuracy. Moreover, the more experience a stenographer has, the better a job they will do.

A good court reporter may take up to five years to reach the type of level that will earn them court reporting certification. They must be able to show that they can write up to 225 words a minute. The kicker? Not only do they have to type above 200 words a minute, but it has to reach at least 97% accuracy levels.

Quick and accurate typing skills are not the only trait or skill demanded of court reporters. There are a whole host of aspects to this job that are individual-specific. Court reporters need to have excellent time management and organizational skills, attention to detail, focus, commitment, and good communication skills.

They must always be in the moment while taking information down. Without court reporters, the judicial system would not be able to run as efficiently and accurately as it does. Without an official record, anything could have happened in a courtroom. Having a record allows everyone to be on the same page and refer to previous things said or done while reviewing the case.

Reporters can also work outside the courtroom and are often hired for meetings, depositions, or other types of legal proceedings. Reporters use their computer and stenotype machines to record what is said and done. Stenotype machines allow for shorthand through use of word sounds to record data and the transcription software helps translate that info into English.

This is just one example of how technology is helping court reporters do their job and transcribe in real time. While you may not always notice a court reporter, they are quietly there, doing their part to create and protect the record.