Working as a Court Reporter

What is a court reporter and what do they do? The field of court reporting did not just start up yesterday; it has been around for quite some time.

Courts have been reliant upon the individuals that have not only learned but honed their profession. Having them there allows 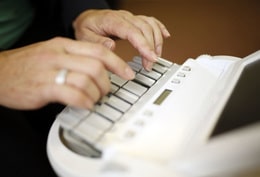 for court sessions to be recorded and remain transparent and fair. You may have heard them described as stenographers or seen one in the movies, typing away at a dramatic court scene.

Whether you are one, know someone that works in this field, or are considering being one, court reporters are an integral part of the court system. Trials could not go on and courts could not function as they do without these human professionals that are taking down every word and action diligently and accurately.

Today we are going into depth about everything court reporting and what this career involves. Everything from recording depositions to court trials and business meetings and more might be something that you make money from as a stenographer.

Court reporters record the events and the words spoken in courtrooms, and everything must be accurate. They are the recorders of what goes on and what is stated and if they don’t hear something they ask for it to be repeated so that the transcription will be correct. If they are asked to strike something from the record by the judge, they strike it from the record.

It does involve skill level and reporters often go to schools or training to learn how to type and perform the job accurately and with a level of quickness, skill, and professionalism. Without their efforts, there would not be a transcription. Courts are not getting rid of this position anytime soon.

Even the threat of technology being introduced is no competition for the real (human) deal. Stenographers just have a level of accuracy and competency that a machine cannot match, at least not to that level. Add in potential error or malfunction and you have a risk both financially and when it comes to the veracity of the record itself.

They simply are not able to have that literally personal touch of interpreting accents or hearing what someone said without getting a word wrong (perhaps the machine is all audio recording and not familiar with idioms or a heavy Brooklyn accent).

Typically, the typing speed for a typist wanting to get into this field would be 200 words. That is not per hour, it is per minute! There also is a requirement for accuracy levels. In most cases, the ability to achieve 97.5% accuracy is desired.

Before that you should get a certification of completion from a court reporting school that is state recognized. That will make you eligible to take the state exam. Upon qualification you will receive your license that allows you to prove you have been trained and are ready to work in the field. It’s a great job to have and if you have the traits and commitment to do this job, then this could potentially be your career!